“Never place your identity in something that can be taken away.”  (Tim Elmore)

As a young minor league pitcher with dreams of pitching in the Major Leagues, my entire identity was as a baseball player. Even though the life of a minor league player is far less than glamorous, I was living the dream.

After being released by the Montreal Expos and then later by the Cincinnati Reds, I felt hollow and lost. Actually, in my mind I had lost my identity. I felt as if I were nothing.

Then, God rescued me once again and opened up doors at such a rapid pace that I found myself as the Head Baseball Coach at the University of Kentucky at the ripe old age of 26! In my first year, we broke the school record for wins; quickly my identity became that of a coach. Consequently, when we were winning I felt complete; but unfortunately, when we were on a losing streak, I became discouraged and a bit of a loner. My life was a series of ups and downs.

The world loves a winner. God loves everyone. “For God so loved the world that He gave His one and only Son, that whoever believes in Him shall not perish but have eternal life” (John 3:16). If I could have focused on this great gift each day, whether I won or lost, I would have had more joy in my life. My identity would have been in Christ instead of an occupation.

Late in my career, I finally learned that you can be competitive and excel in what you do and at the same not “wear it” 24/7. First and foremost, you are a child of God…that’s eternal. You may also be a father, husband or someone’s favorite uncle. You may be a lot of things to a lot of people, but what you do is not necessarily who you are.

In a recent blog, Dr. Tim Elmore shared the elements of a healthy identity:

For Christians, Dr. Elmore’s elements of a healthy identity are the characteristics of Christ who lives inside of us…we need to exude His love and His positive attributes. The “something” that cannot be taken away is His free gift of salvation for everyone who believes and receives. These beliefs last a lifetime and for all of eternity. Through the help of the Holy Spirit, we can solve problems and find satisfaction and joy in serving people.

For those of us who tend to take on an identity based on what we do, it’s good to remember the encouraging words from Paul in 2 Corinthians 5:17, “If anyone is in Christ, he is a new creation; the old has gone, the new has come!” 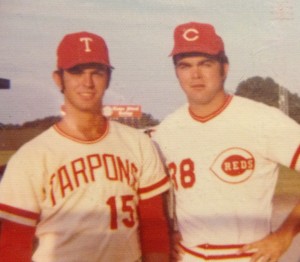 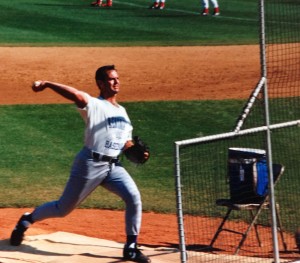 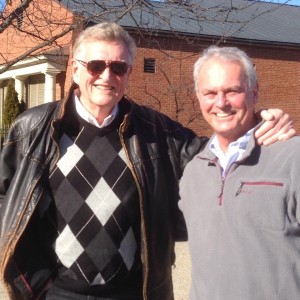 (L) As a minor league ballplayer for the Reds Class A affiliate the Tampa Tarpons, I was honored to spend time with one of my favorite players, Gary Nolan. (Ctr) Being a young coach, I enjoyed throwing batting practice to my players. (R) Recently, I spent some time with one of my childhood heroes, Charles “Cotton” Nash (a two-time all American basketball player for UK). He is one of 12 athletes to have played both MLB and NBA.