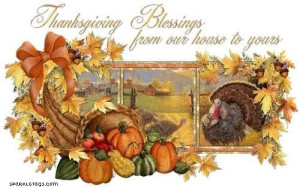 During this very special holiday, I would like to share a brief excerpt from a Thanksgiving letter recently received from my good friend, Dale Ditto:

“The history of Thanksgiving shows many examples of how Americans have given thanks in the midst of hardship.

“Why is it that our most significant times of Thanksgiving were during times of trial in American History? Could it be that during times of prosperity, we take our blessings for granted; whereas in times of troubles we recognize that we should be thankful for what we have? There is plenty of evidence that thankfulness is good medicine. Thankfulness gives joy and contentment and puts our problems in perspective.

“In his call to prayer and Thanksgiving, President Lincoln reminded the nation:
‘We have been the recipients of the choicest bounties of heaven. We have grown in numbers, wealth and power as no other nation has grown. We have preserved in peace and prosperity. But we have forgotten God. We have become too self-sufficient to feel the need of redeeming and preserving grace; too proud to pray to the God who made us.’”
Our American “middle class” is experiencing comforts and bounty in the 21st century that even royalty in other generations could not imagine. Let us all be thankful during times of plenty and during hardships.

I’m stilling trying to grow in the Biblical truth that when I am discouraged, disappointed or even grieving, if I thank God for His blessings, I can experience peace and even joy during trials.Paul encourages us with these words in Colossians 3:15, “Let the peace of Christ rule in your hearts, since as members of one body you were called to peace. And be thankful.”

I thank God for each one of you!